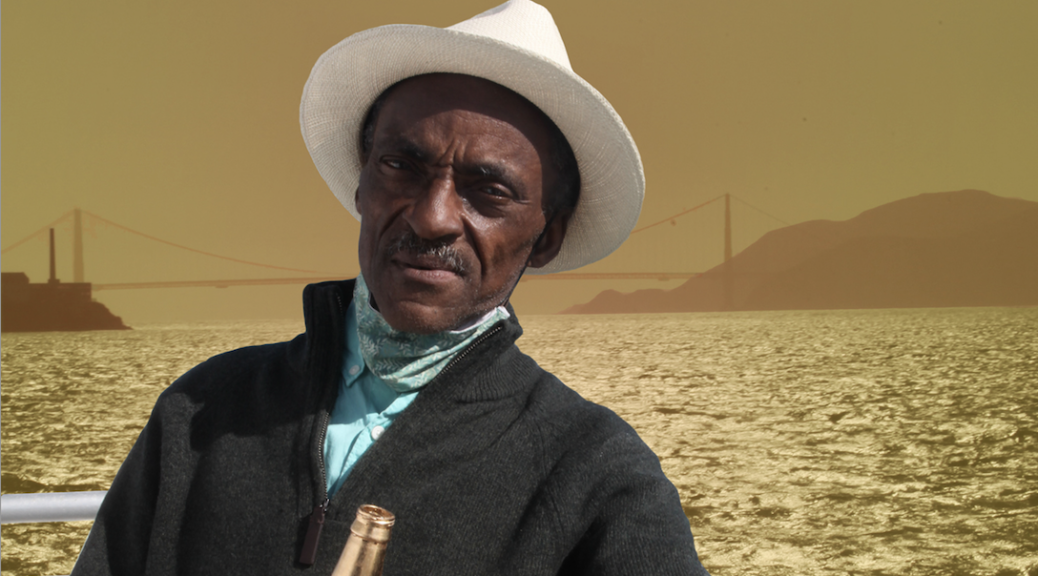 The Opulence Portraits project (May 2018-ongoing) invites Skywatchers ensemble members and Tenderloin residents to dream up the most opulent, lavish, heroic versions of themselves and to manifest that vision in a setting of their imagination. The larger than life portraits assert the need for new civic monuments to make visible radically new kinds of heroes offering us as-yet-untold stories about ourselves, who we are, what we value, and what we seek to become. 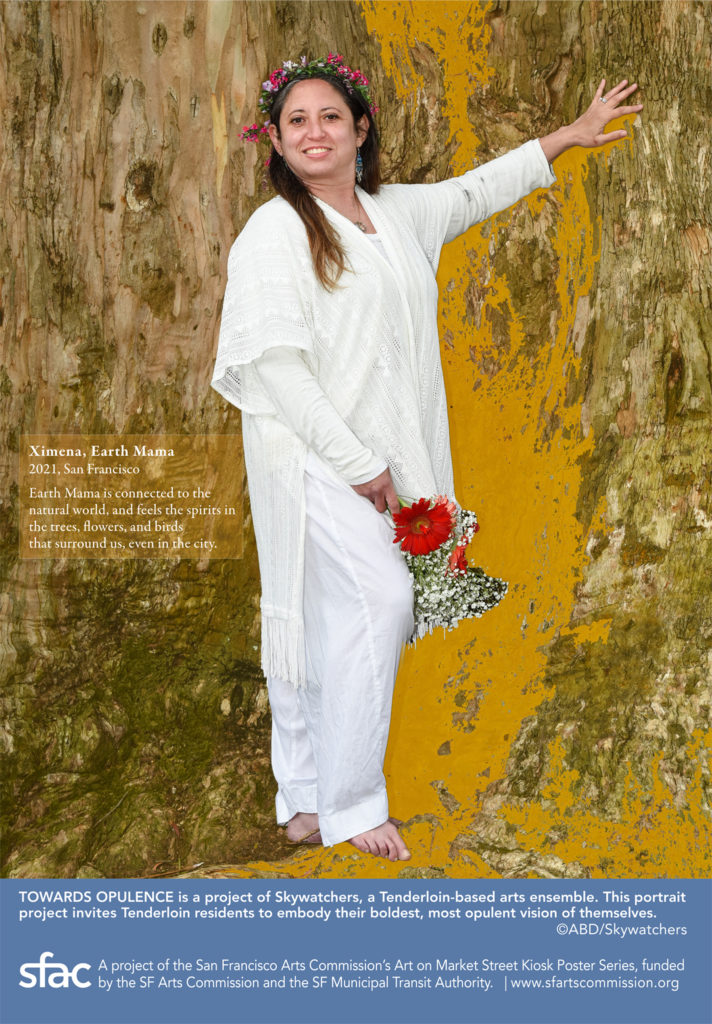 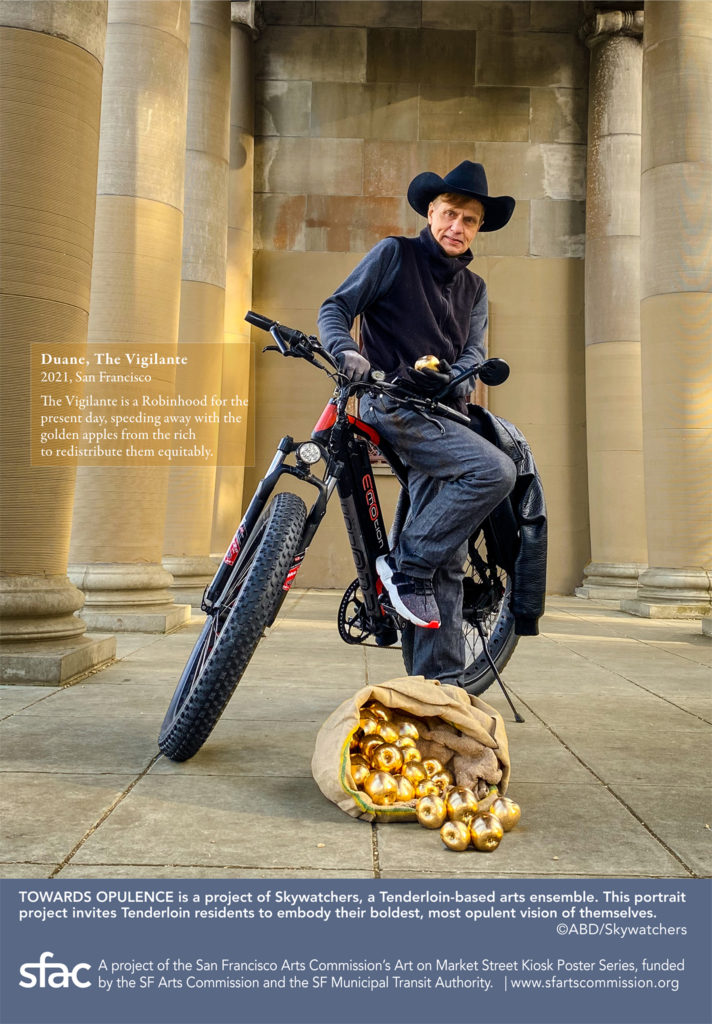 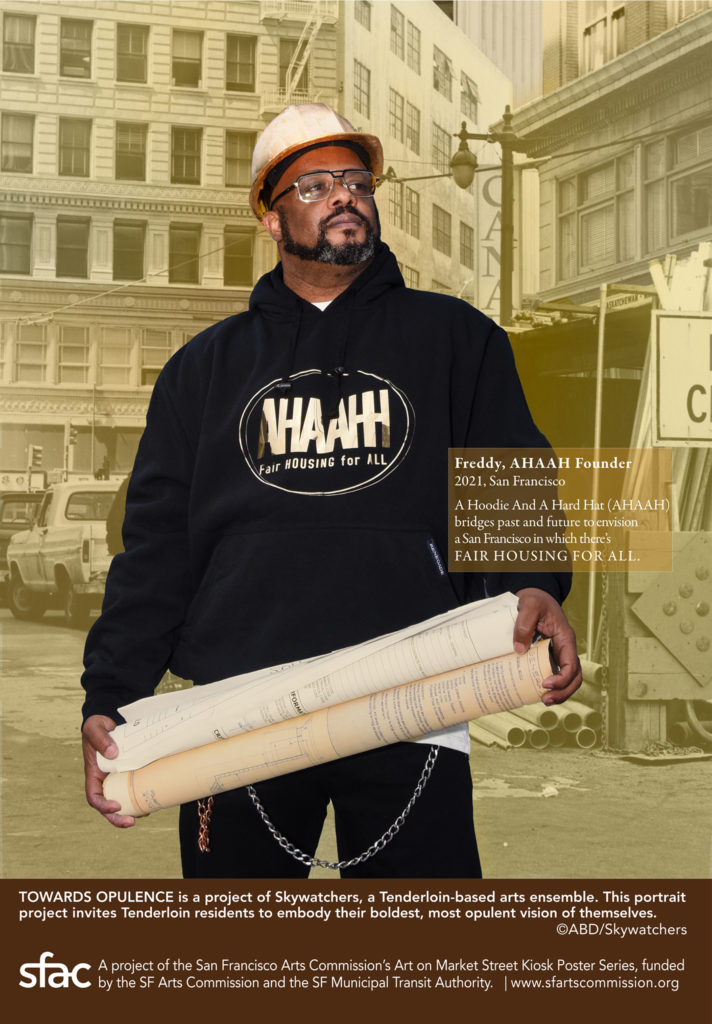 The Opulence Portraits project has produced a pantheon of Tenderloin spirits, divinities, and characters with abilities and attributes similar to a god, deity, or spirit. These performative portraits take shape through a multi-step process that begins with multiple conversations and interviews before the photo shoot. At every stage, participants are engaged in the design of the shoot, making decisions about their wardrobe, props, and setting of the photograph. Additionally, participants create intricate stories detailing the powers of their divine avatars. 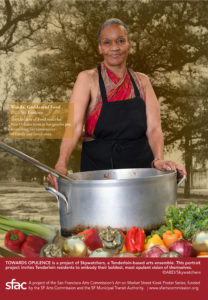 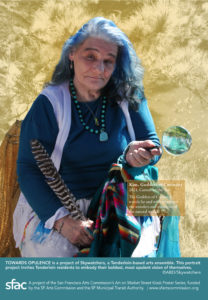 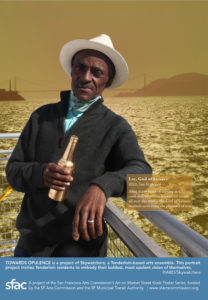 The latest round of Opulence Portraits were featured on SFMUNI bus kiosks on Market Street in 2021 (July-October). 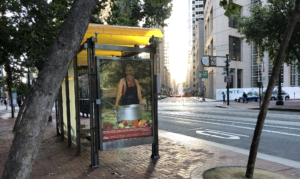 The video below is a document of our processional down Market Street celebrating the launch of the Skywatchers’ Opulence Portraits on SFMTA bus kiosks from Civic Center to the Embarcadero.

As a participant of the Skywatchers’ Opulence Portrait project I was invited to envision an image of my highest self and have this opulent portrayal of my self reflection mounted on bus stop kiosks up and down Market Street.

“Joel,” I hear as I’m headed up some stairs with one of my Opulent peers, Shavonne Allen, to brainstorm about and eventually write these words. “Man, I just saw a life size picture of you on a bus terminal. Awesome!” As I understand the energy with which my name is called, I smile. It is a recent reoccurrence throughout the neighborhood. Many convey their amazement at seeing my picture on a bus stop while others express their appreciation of the choice of costume, the fabrics of revelation. I don’t believe myself to be one for exuberant expression, yet I am glad I could inspire that and receive it from others. Like a saying goes, “the more I am me, the more others can be themselves”, and it continues to be reciprocated.

My brainstorm on this opulent portrait moved from an outline, to forming grandiose ideas and googling images of opulence. After a list of definitions, synonyms, and material explanations with which I felt no connection, I switched tactics to find scenery or backgrounds that would appeal to me and add dimension to the fuzzy image in my mind. This led me to a number of hours at Yerba Buena after dark. I was equipped with my cellphone camera and bluetooth speaker and portable power source. It was my attempt at an outdoor studio and to vibe. A concrete visual was yet to be created and I didn’t plan on going anywhere until it was had. Before the end of the night I was lost in art, lights, and scenery which are unavailable during the day.  It is a space that had been underappreciated and unrealized until I remained long enough to fully immerse myself in all its dimensions. It was a magical night. I guess I required the magic and okayness to sift through the substance–me, not the internet. I had the permission and courage to look at myself and see life in the face of death. If I can believe past my body, my spirit can live, and my art can manifest.

What would I say I received from being involved in this project? What was the impact? Simply put I’m still here, and I don’t know. Let me ask how do you measure impact? Picture a ship goes off course a few degrees and misses grounding on an uncharted reef a mile up. Something as minute as a few degrees was an unrealized major force. So where did this portrait steer me to in 20 years? This project is in 24 hours one more reason for continued sobriety. It lightens my mood when folks say they have noticed. It increases accountability for stepping fully into new growth and continuing to surpass my present. God has blessed me with life to be golden, to be opulent. 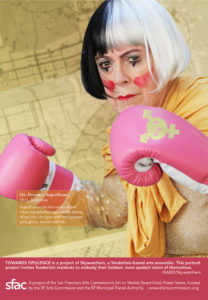 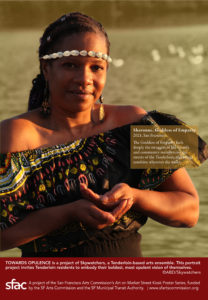